If you were born in the 2000’s like I was, you may not know that some recent fashion trends like bell-bottom jeans and round glasses are actually coming into style for the second time. Every couple of years, trends come and go. It’s a cyclical pattern. I’ve seen classmates in my school walking around in chokers and velvet shirts a lot lately, and I wanted to research why these trends are coming back. Major 70s, 80s, and 90s style staples are being worn by teens and celebrities in 2017, trying to jump on the bandwagon. While some vintage trends haven’t made as much of a successful comeback, (because some past trends like mullets and scrunchies should stay in the past) these items are what you should look out for in 2017 and the new year. Taking inspiration from the past has become more popular now than ever, with certain items becoming chic one year, and a fashion crime the next. Let’s take a look at some of the retro trends that have recently made a comeback.

Bell bottom jeans were a staple item in 70’s fashion. You might’ve seen these pants on hit shows like, “That 70’s Show” and “The Brady Bunch.” These pants have a flared bottom that’ll catch the eye of anyone who sees you walking down the street. Almost any modern clothing store like Forever 21 and Zara will carry these pants, as they want to take advantage of the trend too. Keep an eye out for these pants both on the runway and in your favourite stores!

Made famous by John Lennon and Ozzy Osbourne, round glasses give classy and educated connotations, making the wearer seem sophisticated and put-together. They look simple yet classy, so it’s no wonder why they’re coming back into style. These glasses were also popular in the 70’s, including the “hippie” style coloured sunglasses, which, although they’re similar to the plain glasses, give different connotations: they are fun and colourful. Adding round glasses to your outfit instantly adds simplicity and playfulness to your look. They are a great go-to pick.

Every decade has its fair share of band t-shirts, but it’s the 80’s rock t-shirts that stand out from the crowd. Bands like The Rolling Stones, Def Leppard, Pink Floyd, Metallica, and AC DC have branded themselves onto countless stylish t-shirts. Many debates have occurred between “die-hard” fans of these bands and the people just wanting to jump on the trend. Some people argue that these trendy teens don’t actually know who these bands are whoever and are just in it for the t-shirts. There are also people who are labeled as “fake fans” of the bands on their shirts, as they may not listen to many songs by that artist. Nevertheless, wearing these vintage rock shirts has become a trend in recent years, adding an edge and punk sense to any outfit by throwing it back to the grunge era of the 80s and early 90s. I would suggest not to just throw on a band shirt if you don’t listen to the artist, as you may receive some criticism from your peers, but perhaps look for inspiration from this style and take a listen, branch out your music taste! 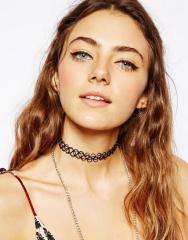 Chokers became popular in the 90’s, and they have become unbelievably trendy in the past couple years. Icons like Victoria Beckham, Alicia Silverstone (Cher from Clueless), Kate Winslet, and Drew Barrymore (top left), have been sporting the choker since the 90’s. Celebrities and teens have been obsessed with the trend, and it’s easy to see why! The choker is such a stylish accessory to add to any outfit. It can add a pop of punk rock or edginess to your outfit, similar to the band t-shirts, which are often paired together. The punk connotations they give are slightly misleading however, as punk rockers of the past tended to wear thicker leather chokers with studs or spikes, and these styles are not popular now. Contemporary uses of chokers can be seen on celebrities like Taylor Swift on the cover on her album “Reputation.” Chokers with charms or long tassels can be a classy add on.

Crushed velvet was trendy in the 90’s, coming in all kinds of colours. These shirts, pants, and other accessories (like the trendy velvet choker) are all one of the more bold choices on this list, because of the strange and look of the material. They add pops of colour and uniqueness that everyone seems to want ironically. They are also very different because they add a soft texture to your look, which isn’t seen often. The likeability of these items of clothing are debated by many, being seen as tacky to some people. One Twitter user remarked, “Honestly can’t believe that people are wearing velvet again. Can we get some other 90’s trends to follow suit?” Either way, crushed velvet has come back in style for 2017! 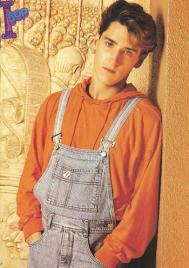 Overalls were extremely trendy in the 80’s and 90’s. In the 80’s, overalls were worn in mostly the average blue denim colour. They were quite baggy and they were worn over top of colourful shirts. In the 90’s, wearing overalls with one strap unbuttoned became popular thanks to Will Smith in “The Fresh Prince of Bel Air.” In those days, overalls were worn frequently by both men and women. Nowadays, overalls have mostly become trendy for women, paired with a white shirt and feminine shoes like heels.

Trends will come and go just like these ones have. This happens because fashion innovators and designers are always looking back on what trends were successful, and which ones need to be left in the past. They use these popular trends to inspire new pieces of clothing today, and, sometimes, they catch on. Wearing these “risky” outfits may be seen as controversial at first because it’s new and different, but soon enough these trends become very popular and even, as some may say, “basic.” These retro items add uniqueness to outfits however, and it’s easy to see why everyone’s jumping on the trend. Overall, retro clothes come back because we are always looking for inspiration from the past to change up our looks.

Soon enough I’m sure the trends of the early 2000’s like butterfly hair clips and body glitter will be seen everywhere!

2 comments on “Chokers, Bell Bottoms, and Overalls: Why These Retro Trends Are Coming Back Into Style”