In front of the Omori station in Tokyo, Japan, there is a man who is doing a street oratory. He appeals to public opinion in a loud voice for around three hours under the blazing sun, but he seems to have very scarce audiences. Most of the pedestrians walk in the station as if nothing has happened. That’s how the Japanese election starts.

In the recent 2019 Japanese election, the turnout rate was a dismal 49%. Compare that to the 66% turnout in the 2019 Canadian election. Japanese voting rates have not always been so low, but recently citizens seems to have lost their interest in politics.

On 25th regular election of the House of Councillors, the teen voter turnout was 35%, down 14 percent from the previous election, the young generation was 31%. Also, the group’s of middle age voting rate  was about 40%, and the old generation remained around 65%. This total voter turnout has been the second lowest percentage for the Upper House since the end of WWII. 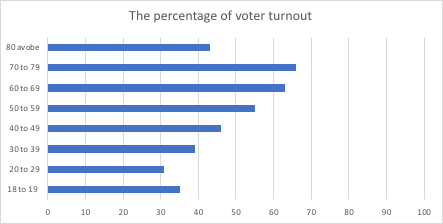 The recent election was for the House of Councilors which some citizens consider less consequential than the House of Representatives which will hold its next election in 2020 or 2021.

18-year-old Juni from Tokyo says, “I think even if I go to the polling place, it doesn’t affect the whole election to select the members. Also, it is undeniable that the House of Councilors does not function properly because even though the members from this house disagree with any submissions, the House of Representatives still can have a right to make a decision instead of them.”

The Diet starts from January every year with 150 days. In the beginning of the Diet, the prime minister declares the overall policy speeches such as foreign affairs and finance which have already been passed through the lower house, the House of Representatives. Then the upper house, the Councillors, discuss the submission again in order to be unprejudiced. However, even if the Councillors in this diet reject these proposals, they will be sent back to the House of Representatives which has the authority to make the final decision to reconsider them.

Therefore, some Japanese citizens like Juni don’t put much weight on the election of the House of Councillors.

In many schools in Japan, though the students learn how the elections work and about the structure of both Diets like the House of Councillors and Representative, but they don’t deeply study why the election are valuable for themselves.

16-year-old Azumi from Kanagawa says, “When we are in school, we don’t gain a lot of information from our teachers about what kinds of parties are running now and what their slogans are, so it may not be attractive for us to go to the voting place when we are 18 years old because we don’t feel the politics are connected.”

Moreover, the average overtime of Japanese employees is 30 hours in a month. Some of the companies require their employees to work more than 13 hours per day. Therefore, some workers don’t have enough time to spend their own time as well as checking information of election.

48-year-old Yoshino from Tokyo says, “Our generations may not have sufficient time to go polling place; actually they have, but they do not passionate about election because of pressure of work.”

An editorial by the Japan Times lamented the low turnout and indicated what the paper thought had to happen in order to raise it. “A significant recovery in voter turnout may not take place unless the political parties engage in a genuine competition that gives voters a meaningful choice,” the editorial board wrote. “And citizens become more aware of the weight of their precious votes and make an effort to cast their ballots.”