In the elite Formula 1 racing league, some of the best, most intense, competitive, and physically challenging racing in the world takes place. In 2026, thanks to one man, the largest racing competition in the world will be innovating their already extraordinary 12-million-dollar cars to a new 2-stroke model that runs on liquid hydrogen, the same fuel that can be found powering NASA’s rockets.

F1 is bringing together engineers from all their manufactures and also enlisting the help of engineers from Porsche and Audi who are in the works to join F1 the same year.

“We need to look at what our future power units will look like,” said engineer Pat Symonds, the Chief Technical Officer for F1 and the man behind the change. “At F1 this is what we are engaged in at the moment.”

He was speaking at the Motorsport Industry Association’s energy-efficient motorsport conference when explaining his plan to incorporate hydrocarbons for fuel and a 2-stroke engine design.

“I certainly think that the internal combustion engine has a long future and I think it has a future that’s longer than a lot of politicians realise because politicians are hanging everything on electric vehicles.”

With the current rise of electric cars, and global warming concern, there seems to be a near end to internal combustion cars, but cleaner, more efficient fuels are also an alternative. Liquid hydrogen is a sustainable, eco-friendly fuel that is even more powerful than petroleum-based engines. 1 kg of liquid hydrogen amounts to 33.33 hp, whereas gasoline amounts to around 12 hp.

The change from 4-stroke to 2-stroke engines could change the course of F1 racing and potentially, more than double the power output of the current engine design. It will also encourage competing manufacturers to innovate further the potential of internal combustion cars since they must solve increasingly difficult problems that few individuals have faced so far. The change to a 2-stroke may seem odd to the average person who associates 2-stroke engines with dirt bikes and lawnmowers, but the 2-stroke cuts the process of a 4-stroke in half. Only with more problems yet to be solved.

Here’s how they work.

A run-of-the-mill, 4-stroke engine works in 4 steps. Intake, compression, combustion, and exhaust. In more simple terms, suck, squeeze, bang and blow. Fuel and oxygen get sucked into the combustion chamber, inside the engine block, and the piston compresses the fuel and air together completing one full revolution. In the second revolution, the cylinder’s spark plug ignites the now squeezed fuel and air as the piston comes down and creates the explosion that powers the car. The combustion that occurs pushes the car forward, and the carbon emissions that are left over are expelled out of the exhaust pipe and repeat.

The big difference in-between the 2 engine types is that the 2-stroke configuration cuts the 4-stroke process in half. It takes the two revolutions that you see in the picture above and combines the first two and the last two laps resulting in double the power in half the time.

“The opposed piston engine is very much coming back and already in road car form at around 50 per cent efficiency.”

The 2-stroke engine will also be a hybrid making it yet more powerful. The goal is to develop clean cars that run on sustainable and renewable synthetic fuel. Realistically, there are two options, synthetic biofuel made of plant waste and other greens such as algae or hydrogen-based fuel. Hydrogen is a bit more complicated in terms of safety due to the sheer amount of power it can produce, but it has more promise and has already been used in multiple areas such as the not-so-famous Toyota Mirai. It uses a hydrogen gas version and if you haven’t heard of this mass-produced engineering marvel, that is probably because hydrogen cars never took off in the domestic market. This may be due to the fact that the explosive gas must be made, then compressed into high-pressure tanks, then put in your car. The whole process is both inefficient and more dangerous then plain ol’ gas. But liquid hydrogen is a different story. 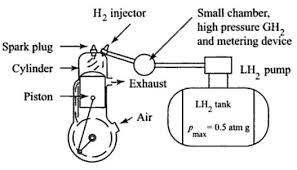 When it comes to circulating liquid fuel through a V6, both gas and hydrogen combustion engines work the same to a certain degree, hydrogen models however are more complex and have lots of features yet to be developed. In the case of F1 cars, using liquid nitrogen will force engineers in accounting for the safety precautions they don’t have to account for in gas models.

Former Formula 1 racer, Basil van Rooyen, was amazed, when he was told the idea Simmonds had introduced.

“I only read this news when you referred me to it and I am delighted by it — it is so important that Formula 1 cars should always reflect the engineering of the cars we drive…” he told Michele Lupini on grandprix247.