The original Hocus Pocus was one of my mom’s favorite Halloween movies. She has never liked horror, but loves a great comedy. I grew up watching this movie almost every year. I would come home from trick or treating with my sister and cousins, and we would pick some of our favorite candies, curl up on the couch and enjoy Hocus Pocus.

After 29 years, Disney has revived this Halloween classic. Hocus Pocus 2 gives you deep belly laughs, from how lost and gullible the witches are in this era to the witty banter between the sisters.

The 29-year hiatus between the two movies means the sequel targets a wide audience: the returning fans of the original and families looking for a spooky yet child-friendly movie to enjoy this Halloween.

Watching the second movie was much more enjoyable because I understood references to the first film such as the black cat, Billy Butcherson and Sarah’s lucky rat tails. I highly recommend watching the original movie before the sequel — the viewer will miss out on subtle references if they have not. Watching them together would make a great Halloween family movie night.

While this is a Halloween movie, it is a comedy at heart. The witches are clueless when it comes to modern advances in society and technology. “Bats and beetles find something, anything we must fly,” says Winifred (Bette Midler) to her sisters. While Winifred has a broom, her sister Sarah (Sarah Jessica Parker) flys on a swiffer and Mary (Kathy Najimy) stands on two Roombas. Mary continues to talk about how her “broomies are misbehaving,” and getting  “the girls” (referring to the vacuums). It’s this obvious naivety that gives this movie charm and character. Hocus Pocus 2 starts with the Sanderson sisters as children. The day is Winifred’s 16th birthday and the town reverend declares that Wini shall marry. When Winifred refuses, the reverend tries to take her sisters from her, but they manage to run away into the forbidden woods, where they become the witches we know today. Then the story shifts to the present day—Halloween 2022 in Salem—and the viewer is introduced to three high school students who are interested in magic.  It’s said that on a 16th birthday a witch receives her powers. Today is Becca’s (Whitney Peak) 16th birthday, she and her friend Izzy (Belissa Escobedo) go out to the woods near her house to perform their birthday ritual, but this year something is different.

Disney loves a good life lesson embedded into the plot. Whether you are a slave to your evil step sisters, a prince trapped as a frog, or an ‘ugly’ hunchback hidden away from the people, everyone has someone who loves them or someone whom they love. In the first movie, Max Dennison learns how much he truly loves his little sister Dani after the Sanderson sisters try to take her life.

In the sequel, Disney shows the power of a sisterhood and the love that keeps them strong. To showcase this, the first scenes show the Sanderson sisters as children narrating how Winifred has always protected and taken care of her sisters. Although Wini always took care of her sisters, the movie doesn’t portray her as a caring person. Winifred insults her sisters throughout the movie, calling Sarah a “simpleton,” and rolling her eyes at ideas the girls propose. Wini even hits Mary and slaps Sarah across the face for some of the things they say. By watching the way Winifred treats her sisters, it is not clearly evident that Winifred loves them in a meaningful way. 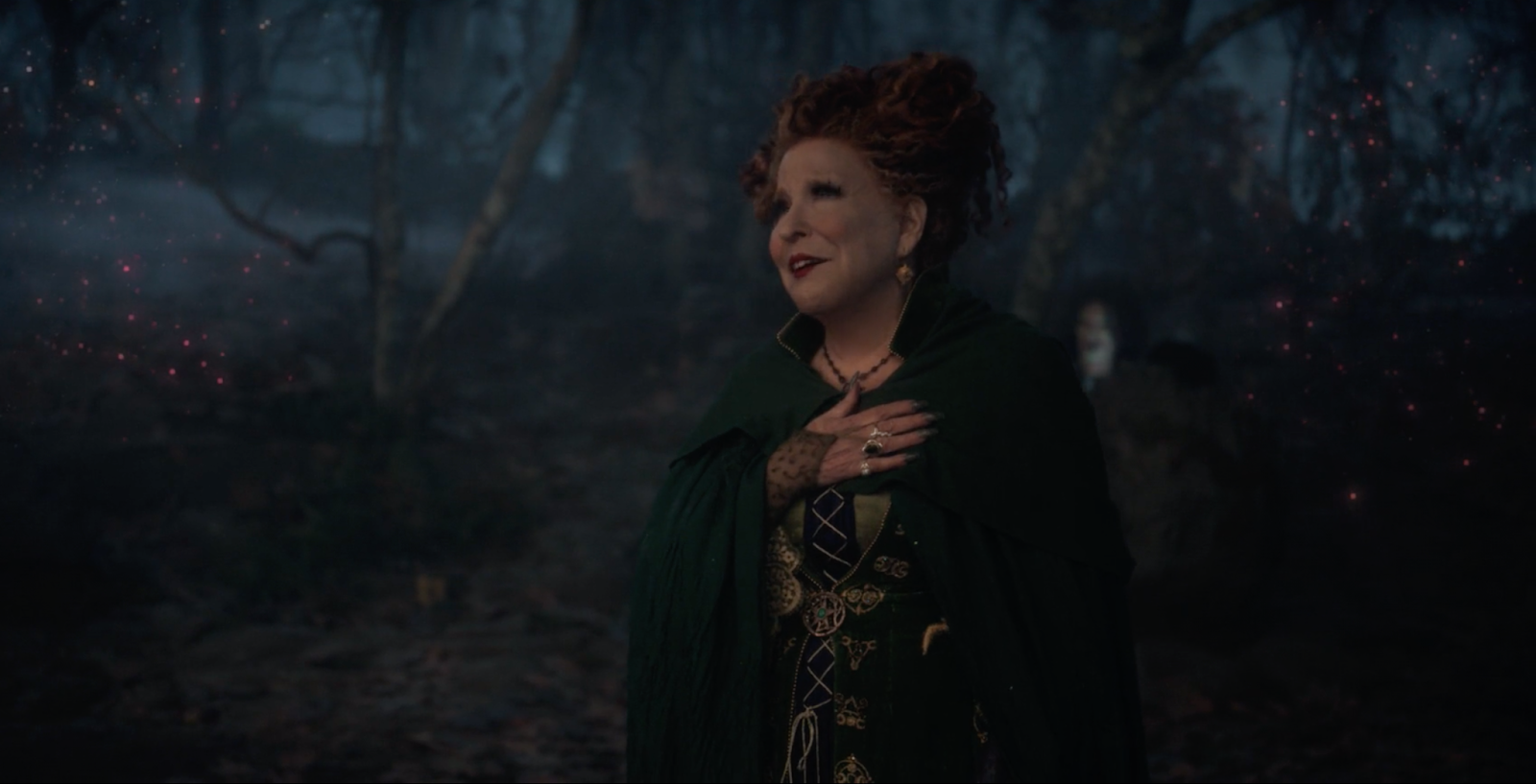 Sometimes you do not realize what you truly have until it is taken from you. After Winifred loses her sisters, she proclaims “What is this feeling, I think it is my heart, I fear it is breaking, oh I cannot bear this,” while clutching her chest. She then begs a young witch to reunite her with her sisters, because in the magical words of Winifred Sanderson, “My powers are nothing without my sisters.” And in an hour and 40 minutes, the audience has been educated on the strength, power and love of a kinship.

While most of the actors gave an average performance, Bette Midler, Kathy Najimy, and Sarah Jessica Parker, gave the Sanderson sisters life. Despite her age (76 years old) Bette Midler provides a lively performance,giving Winifred those crazed eyes, puckered lips and sinister accent that make her unique.

The spirit of the characters is captivating, especially when they sing. These women can sing! The Hocus Pocus song “I Put A Spell On You” was written with Bette Midler in mind and she delivered. In Hocus Pocus 2 the already popular song “One Way Or Another” by Blondie was used and altered slightly to better fit the movie and the performance was one of my favorite scenes. For a family looking for a funny and thoughtful Halloween movie, I would suggest you grab a bowl of popcorn, get some delicious candies and enjoy this sequel on the hilarious Sanderson sisters.

0 comments on “Hocus Pocus 2 is a hilarious, witty, and nostalgic sequel to the Halloween classic”