On the evening of the 13th of November, Donald Trump Jr. published private messages on Twitter revealing conversation between himself and WikiLeaks during the 2016 US Presidential election. In the Twitter conversations with Trump Jr., WikiLeaks asked for favors such as a statement about Hillary Clinton access to publish then-candidate Trump’s tax returns.

Trump Jr. only showed interest at the beginning of the chats, such as when Wikileaks informed him about an anti-Trump website. Donald Jr. said that he do not know anything about it but would ask around.

In addition, WikiLeaks asked him to push a story about Clinton and he replied that he already did this. In connection with this, he asked about the background of a post from WikiLeaks. Wikileaks then suggested repost a link for his Twitter followers. Trump Jr. didn’t reply but 15 min later, Donald Trump Sr. tweeted: 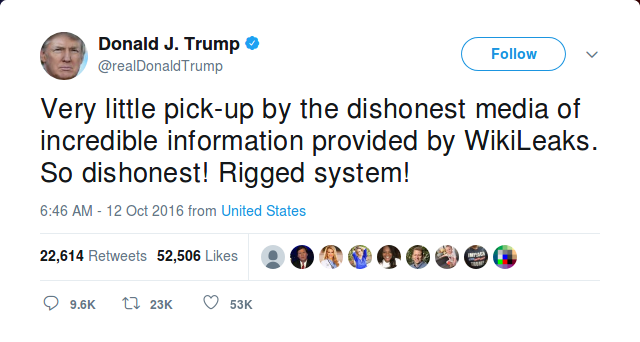 According to The Atlantic, this conversation casts a damning light on WikiLeaks and on the Trump Campaign because it shows an agreement to break federal campaign-finance rules.

WikiLeaks is the website which published hacked e-mails from presidential candidate Hillary Clinton during her campaign. The leaks, which were timed for maximum effect, was one of the reasons for her loss in the election. The US intelligence community has stated that Russia was behind the hacking.

According to election rules, campaigns are not allowed to accept  “substantial assistance” from foreigners in a campaign.

0 comments on “Did Donald Trump Jr. overstep a line by communicating with WikiLeaks?”